A History of Community and Caring, Since 1933 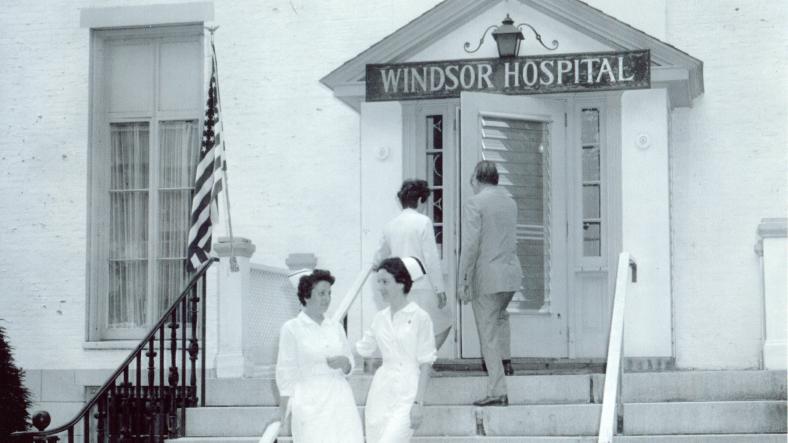 The story of Mt. Ascutney Hospital and Health Center is one of local people coming together to ensure exceptional health care for the community. It is true today, and it was true at the very start in 1933 when a group of area residents joined to form the Windsor Hospital Corporation. These organizers wanted to create a true community hospital, which residents and visitors could depend on for generations.

The original Windsor Hospital was established in what is now the Stoughton House on Main Street, a former mansion deeded to the cause by Allen Evarts. After a fund drive raised $700 for second-hand hospital beds and an old Army operating table, Dr. and Mrs. Arthur Patch traveled to Maine to procure them.

Windsor, historically a center of industrial activity, was a busy town in the Hospital’s early decades. The Goodyear Tire and Rubber Plant and the Cone Automatic Machine Company were major employers, and a state prison was located in the downtown district. People headed to Main Street to shop, dine, and go to the movies, right down the street from Windsor Hospital. And for decades, the Hospital provided high-quality care to this bustling community.

However, by the late 1960s and early ’70s, the Hospital was facing challenges. The doctors who had been the founders were at retirement age, and new physicians were needed. The old Hospital building no longer met government codes, and state officials were threatening to shut it down. Meanwhile, regionalization had become popular among planners. State officials were promoting a regional hospital proposed for Charlestown, N.H., to replace many of the area’s community hospitals.

But Windsor Hospital’s board and administration had other ideas. They decided to build a new hospital on farmland owned by a local prison facility on County Road, a project that they undertook without state or federal financing.

Without outside aid, the Hospital looked to community residents for local support. Employers in town allowed payroll deduction for contributions. Area residents pledged over $600,000 for the new hospital, which opened in 1972. It had a 30-bed nursing home attached and eight extended-care beds. With the change came a new public identity, Mt. Ascutney Hospital and Health Center, reflecting a wider mission.

The Hospital has never stopped growing and changing to meet community and regional health needs. 1986 saw the addition of a ten-bed Acute Rehabilitation Unit as a collaboration between Mt. Ascutney Hospital and nearby Dartmouth Hitchcock Medical Center. It was one of only two acute inpatient rehabilitation programs in Vermont. The Miller Therapeutic Pool followed in 1999.

The Hospital was designated as a Critical Access Hospital by the federal government in 2001, helping to strengthen its ability to serve the community. While regulations at the time put the rehabilitation program on pause, a 2003 statutory change paved the way for the Rehabilitation Unit to return stronger than ever in 2004. In 2013, the 30-bed nursing home closed, making it possible for expansion of the Rehabilitation unit as the Hospital launched “Positively Vital”, a four-year capital campaign to help fund an array of upgrades across the organization. With the expansion came the state-of-the-art, CARF-accredited, Rehabilitation Center at Mt. Ascutney Hospital. Just as before, people and organizations across the region joined together to support local health by raising much of the funding needed for important renovations. 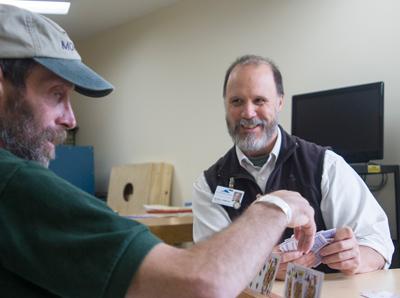 Over the decades, the Hospital’s staff has grown from a handful of dedicated doctors and nurses to a team of hundreds, providing a spectrum of healthcare services to people in Windsor and in many surrounding Vermont communities, as well as nearby communities in New Hampshire. While the early Windsor Hospital relied on four mainstay doctors, the current medical staff includes dozens of providers, many of whom provide specialty services. Its regional scope includes membership in the New England Alliance for Health, a three-state network of hospitals and healthcare organizations. Since 2007, the Hospital has operated Ottauquechee Health Center in Woodstock, Vermont, providing outpatient primary and specialty care to Woodstock-area residents and visitors. 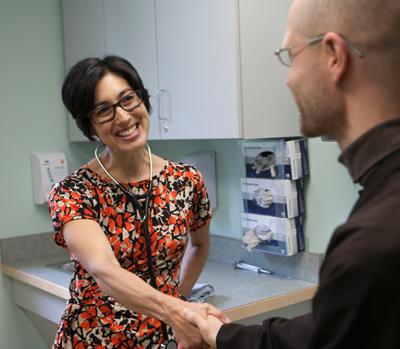 Part of serving the community is recognizing that the Hospital’s mission, “to improve the lives of those we serve”, reaches well beyond the Hospital campus. Today, the Hospital includes the Ottauquechee Health Center, the Historic Homes of Runnemede senior housing, and Mt. Ascutney Hospital and Health Center Ophthalmology. It also supports the Windsor Connection Resource Center, and the Mt. Ascutney Prevention Partnership. It has taken the lead in community education programs and sponsored the Windsor Community Health Initiative—work that earned it the American Hospital Association’s prestigious Foster G. McGaw Prize for Excellence in Community Service in 2011.

Taking action has earned accolades for Mt. Ascutney Hospital and Health Center. It looks to a bright future as the recipient of Best Practice recognition by the National Rural Health Association for healthcare quality, as one of the American Hospital Association’s “Most Wired” hospitals for integration of technology to boost clinical performance, and with Efficiency Vermont’s 2018 Energy Star® certification for its energy efficiency efforts.

In addition, the National Committee for Quality Assurance has awarded the Hospital with Level 3 status, the highest level of medical home designation. Read more about accolades garnered by Mt. Ascutney Hospital and Health Center.

From 1933 to the present, Mt. Ascutney Hospital and Health Center has served a community that takes pride in its community hospital, and works tirelessly to sustain it, as the Hospital works to keep people well. It is the definition of a healthy relationship.